As a necessary part of our journey in Bosnia-Herzegovina, we fell in love with Sarajevo, the capital of the country – a city of incredible cultural and religious diversity, with an undeniable historical richness! We offer you to have look back on our exploration of the capital, rich in discoveries and small details!

Adepts of history and small crispy details of the past, we enjoyed discovering Sarajevo’s history through 4 key points:

The 1st electrified tramway in Europe was built in Sarajevo. Inaugurated on January 1, 1885, the tramway still serves the capital main districts – something convenient to visit from one end to the other!

The starting point of World War I

The heir to the Austro-Hungarian throne, Franz Ferdinand, was assassinated during an official visit to Sarajevo by a pro-Yugoslav commando: remember, it was indeed with this crime that the First World War began in 1914! The exact place of the assassination is still visible: at the corner of an old cafe, near the Latin Bridge, a commemorative plaque recalls this tragic incident.

In 1984, the capital hosted the Olympic Winter Games held in the former Yugoslavia. You can still explore the abandoned infrastructures all around the city: from the bobsleigh track (apoleva cesta way) to the Olympic stadium (alipasina avenue) and ending with the Igman ski jumps used during ski jumping events, there is no chance to miss exploration grounds in Sarajevo!

The independence war in Bosnia-Herzegovina reached its peak with Sarajevo’s siege between 1992 and 1995: you can still see remains from the war everywhere on the city buildings but also on the ground with the “roses of Sarajevo” (holes left by mortal explosions, filled with pink plaster).

To find out more about Sarajevo’s history, we really recommend you to join a Free Tour (tip-based tour by a certified guide)!

It’s important to know that Sarajevo is a city all in length, surrounded by mountains. We have mostly identified three parts, based on the different architectural types observed:

We have focused our visit in the center and eastern part of the city, where you can find the Catholic Cathedral, the Orthodox Church, the great Gari Husbrev Mosque and the synagogue on the other side. From the Sebilj fountain, we advise you to walk through the bazaar and then head east along the cemetery towards the Yellow Bastion/Zuta tabija (Jekovac street). Not far behind you can also admire the old military base, completely abandoned (bijela cesma). Go down along the Miljacka river, past the national library Vijecnica and continue to the National Theater. From there you can meet street chess players, artists, lively bars, the London Murphy’s bus and the Eternal Flame. Afterwards, you will be welcome to take a well-deserved break: don’t close this page, as we also give you our best addresses!

With our budget, we usually limit our outings (restaurants & bars) except when one of our hosts offers us something nice! We finally had the opportunity to try some very good addresses that we would like to share with you: 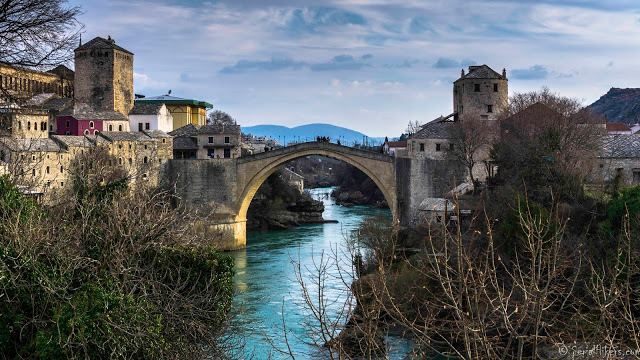